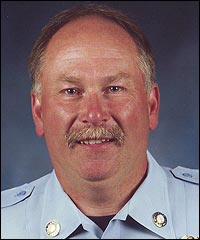 Doug was born October 25‚ 1965‚ in Woodbury‚ New Jersey. He was the son of Thomas and the late Betty Farrington. His family then settled in southern Pennsylvania‚ where he enjoyed living the country life. He graduated from York Vo-Tech High School. In 1996‚ Doug met and married the love of his life‚ his wife‚ Stacey. Doug and Stacey raised their three children‚ Kyle‚ Matthew‚ and Kelsey.

Doug joined the Delta-Cardiff Volunteer Fire Company in 1983. He was also a member and volunteer with the Whiteford Fire Company. Doug served on the board for the Harford County Farm Fair for several years. With Delta-Cardiff‚ he served as a fire captain‚ fire lieutenant‚ and treasurer. He was serving as president of the fire company as well as president of the Mason-Dixon Fair. Doug took the reins of the local carnival and turned it into a full scale fair sanctioned by the State of Pennsylvania. He served as fair president for over 12 years. Doug’s final project‚ before passing‚ was to negotiate the purchase of land for the expansion of the fair‚ as well as a new location for the Delta-Cardiff Volunteer Fire Company.

Doug enjoyed firefighting and accepted a job with Aberdeen Proving Ground Fire Department. At APG‚ he continued his education and training until becoming a fire inspector. Doug was instrumental with insuring that APG received national recognition by receiving National Fire Prevention Awards.

Doug was involved with his children’s activities. He coached all three children through many years of baseball‚ softball‚ and soccer‚ while holding the position of president of the leagues as well. His love for sports did not stop with the children. He was a huge football fan. Doug worked part-time for the Baltimore Ravens.

For the past thirteen years‚ Doug owned and operated a successful landscaping business. With no time to spare‚ he was still able to hunt for deer each fall‚ something he looked forward to year after year. Christmas was Doug’s favorite holiday. There were never enough decorations and lights for him. He arranged for local civic groups to sponsor a party each year so each child attending would receive a gift. He played Santa Claus for the community as well as neighboring areas.

Doug was always working to improve the fire department and the community as a whole. His death leaves a huge gap in our hearts but leaves a greater legacy in all the people he inspired over the years to do things bigger and better.