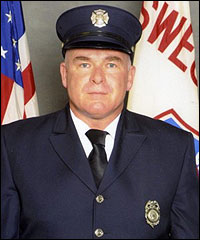 Born in Oswego‚ he was the son of David and Linda (Pollock) Davis.

Scott was a fireman and a critical care technician with the Oswego Fire Department for 14 years. He had previously been employed at Niagara Mohawk for eight years.

Scott enjoyed camping‚ hiking and crossword puzzles. He was an avid Boston Red Sox fan. He loved his family and fire department.